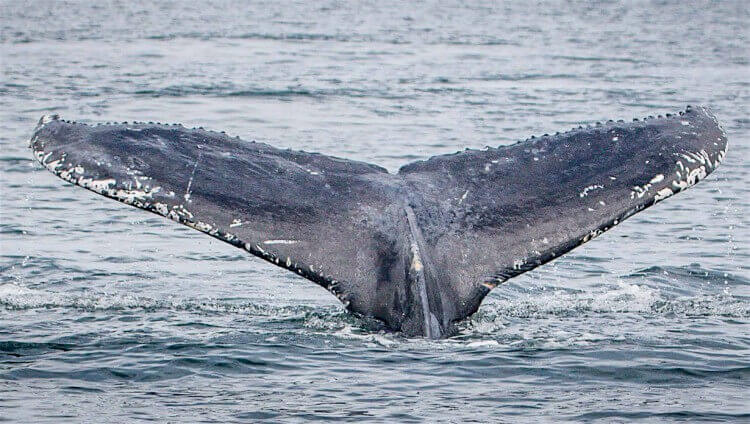 Watery wonderlands: can you go whale watching in the UK?

Can you go whale watching in the UK? Yes you can! Forget going all the way to Florida to see whales in captivity doing tricks, this is all about seeing whales (and plenty of other marine life) in the seas. And it’s all happening around the incredibly scenic and wildlife-rich coastline of Scotland.

Here’s our guide to what you can see where in the UK when it comes whales, dolphins, porpoises, seals and a whole lot more.

A topography that’s just perfect for marine wildlife – including whales

Scotland boasts 29 different species of marine mammals (the most for any area in the UK), from the harbour porpoise and common seal, to the migrating humpback whales and minke whales. Scotland’s highly-indented coastline on the west and north is littered with sheltered water sea lochs created by the glaciers in the ice age and there are over 800 islands of the mainland.

In these western and northern parts of Scotland, you can go whale watching in several locations. It’s also the area that is on the edge of the European Continental Shelf. You have to be a clever geologist to understand all this, but the Scottish National Heritage website explains the seas and coast well, as does this handy graphic, which shows you what the shelf looks like. 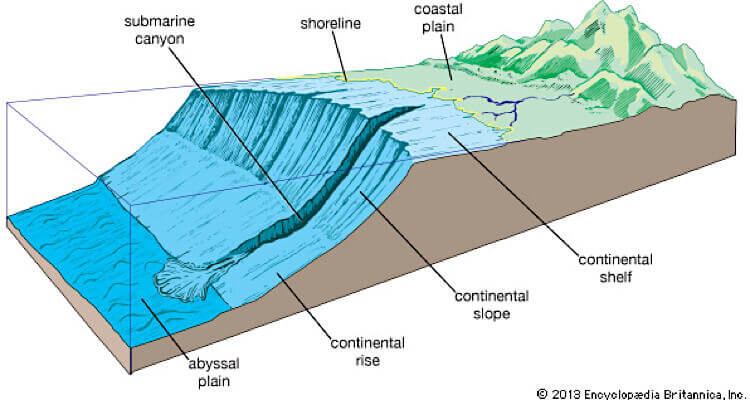 And just think, beyond this relatively shallow water shelf around the coast of between 15 and 70 metres, the open ocean is over 2000m in parts!

In essence this all means that around the Inner and Outer Hebrides, the warm and cold waters of the Atlantic and the north meet, creating the North West Approaches, a habitat rich in both resident and visiting birds and mammals.

So that’s why the west coast of Scotland is the best place in the UK for whale watching. Now you’ll be itching to know what sort of species you can see and where.

Let’s start with the big-hitters – the whales.

Whale spotting – the best places to see them in the UK

In Scotland when you talk about whale watching, it’s most likely going to be Minke Whales you’ll be spotting. They’re around usually from May onwards, but in particular after mid-Summer. The stretch of water called the Minches between the mainland and the islands of Tiree, Coll and Mull are the Minke whale spotting hotspots. From Stornaway, the main town on Mull, you can book a specific whale watching tour with one of several operators. Or even if you take the scheduled Ullapool to Stornaway ferry service, make sure you’re on deck as you can often spot Minkes as you get close to the ferry port on Mull.

South of Oban, you’ll find the Gulf of Corryveckan, between the Jura and Scarba Islands. The particularly strong Atlantic currents and a rather unusual topography here creates swirling waters that are, in fact, the third largest whirlpool in the world. It’s a haven for Minkes as well as Porpoises, who swim in the fast-moving water. There are no regular ferry boat services around these parts, but there are sea safaris that go from the Isle of Seil to visit this very rugged corner of the coast. 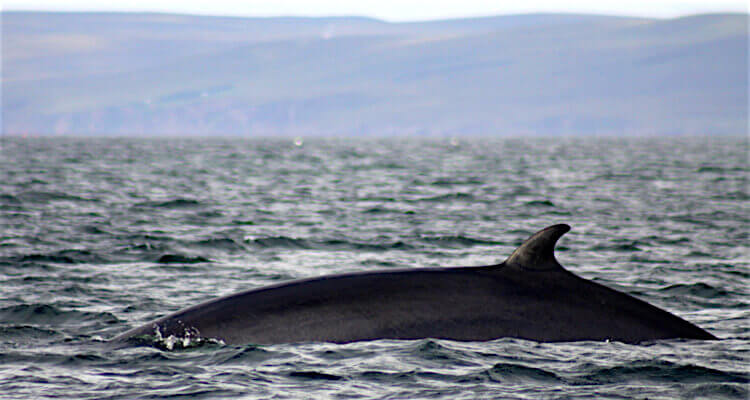 Humpback Whales in the UK

Nothing beats watching a 17m-long Humpback Whale breaching (where they leap out of the water) to then dive back in, with that distinctive tail going in last. These magnificent creatures (along with occasionally-sighted Long-finned Pilot Whales, Sperm Wales and Basking Sharks) aren’t resident around these shores, but they do migrate from the warmer waters of the African tropics where they breed, to the colder waters of the polar regions where they feed. And to get there, they pass by those famed North West Approaches around the Hebrides.

You’ll be pretty lucky to see a Humpback Whale in the UK, but if you do it’s an unforgettable sight. Websites like the Whale & Dolphin Trust list recent sightings of all marine mammals according to the area of the UK and the Sea Watch Foundation has loads of information for whale watchers too. 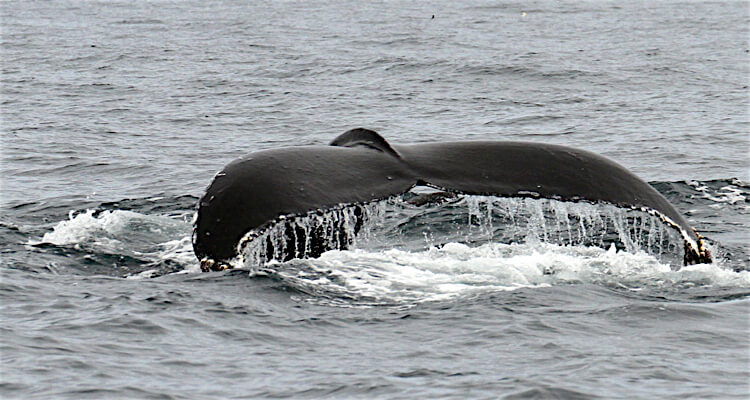 They might ‘just passing’, but if you see a Humpback Whale breaching out of the water, you’re a very lucky whale watcher in the UK!

Dolphins are expert swimmers and their playful nature means they love to bow-ride, that’s to say swimming alongside at the prow of a boat, which offers a superb natural spectacle for anyone lucky enough to be in said boat! Dolphins can be spotted at various locations in the UK, but there are very healthy numbers in Scotland.

Dolphins can be spotted not only amongst the whales on the western coast, with the waters around Skye, Coll, Tiree and Mull being favoured by the common dolphin. The Bottlenose Dolphins are particularly proliferous on the east of Scotland in the Moray Firth and the Firth of Forth. There are both resident groups and dolphins who come to visit from the open ocean. Canonry Point is a focal point for dolphin watching in the UK, with dolphins visible from land. Boat trips to see dolphins leave from Cromarty, Avoch and Nairn on either side of the Moray Firth, not far from Inverness. 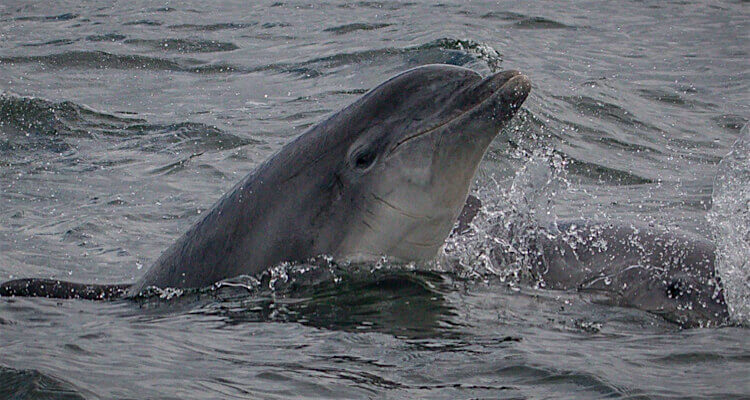 What could be more magical than having a smiley-faced dolphin swimming alongside your boat?

Seals can be seen at locations all over the UK, but once again Scotland tops the leader board when it comes to numbers and indeed, they say it’s the best place in the world to see Atlantic Grey Seals. They have pups in October and November time and often retreat to breeding colonies on the wild uninhabited west coast islands to have their young. But out of the breeding period, you’ll should be to quite easily see them, especially when they are in what marine biologists call ‘loafing’ mode, when they basically sunbathe own rocky promontories.

As for where you can see the Grey Seals, it’s the same as Minkes and the Dolphins, with the areas from Skye to the Jura being prime seal spotting locations. 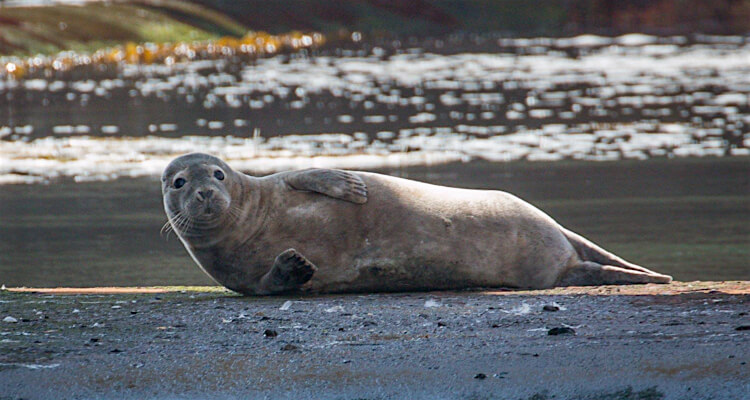 Say hello to Mr Loafing Seal – just hanging around on the dock of the bay!

Last but not least, the Harbour Porpoise

At just over one metre long, the Harbour Porpoise is much smaller than its dolphin cousins. They love shallower water and can often be seen swimming near harbour walls (hence the name!). They are commonplace in Scotland from the Shetlands to the Borders, as well as other places in the UK. They have to watch out though, as these little mammals have plenty of predators out there in the seas – including, would you believe, the Bottlenose Dolphins. 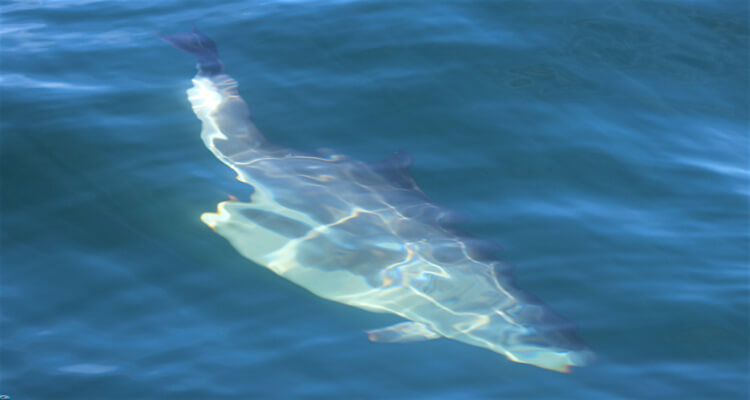 Can you go whale watching in the UK  – and see nothing?

Whether you see that Minke Whale is all down to Mother Nature – and patience. You’ll increase your chances by booking onto an organised boat trip, as the skippers are experienced experts in finding the best spots where you’re likely to see whales and other species.

If you do fancy a sea expedition, do make sure you check the operator is WiSE accredited. If they are listed on the WiSE website, it means they are Wildlife Safe approved, respecting the wildlife disturbance limits and operating safe and sustainable trips.

Now you know where you can go whale watching in the UK, the Welcome to Scotland website is a great place to start planning your whale watching trip to Scotland, allowing you to explore each of the Scottish regions in turn. 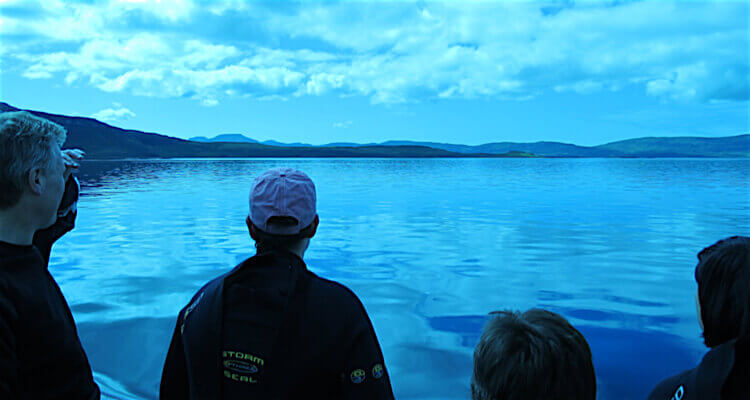 Can you go whale watching in the UK? Yes you can – you just need patience and good luck!

Get Your Rotors Running: All You Need to Know About Gyrocopters!
Catch of the Day – Do You Need A Licence To Fish in the UK?