Home General Experiences The Origins of the Two Seat Spitfire 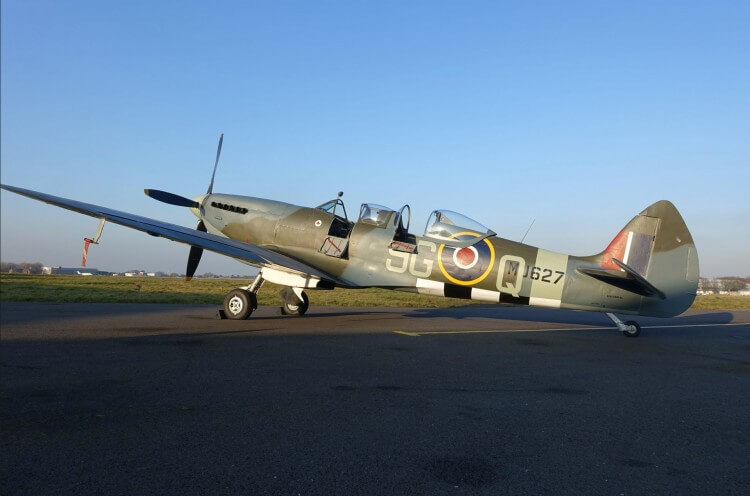 The Origins of the Two Seat Spitfire

Spitfire flights would not be available to the public today if it wasn’t for the creation of the Two Seat Spitfire. With that in mind, here at IntoTheBlue we began wondering why the conversion was made in the first place, who were they modified by, and what happened to them when the single seat Spitfire was decommissioned? To answer all this and more, we’ve once again enlisted the help of aviation historian and author Robin J. Brooks.

Learning to fly three different types of aircraft during wartime was the RAFs standard requirement, before a pilot could join a squadron and become operational. Supermarine had thought, and indeed planned, to make a two seat Spitfire as far back as 1941. The main reason behind this decision was to fast track the process of pilot training. The idea behind this being that two trainees could go up in the Spitfire at the same time. It was initially thought that the Air Ministry would jump at the opportunity to improve efficiency, and cut the amount of time it took to train a pilot. It was somewhat of a shock, then, when the Ministry rejected the idea outright. 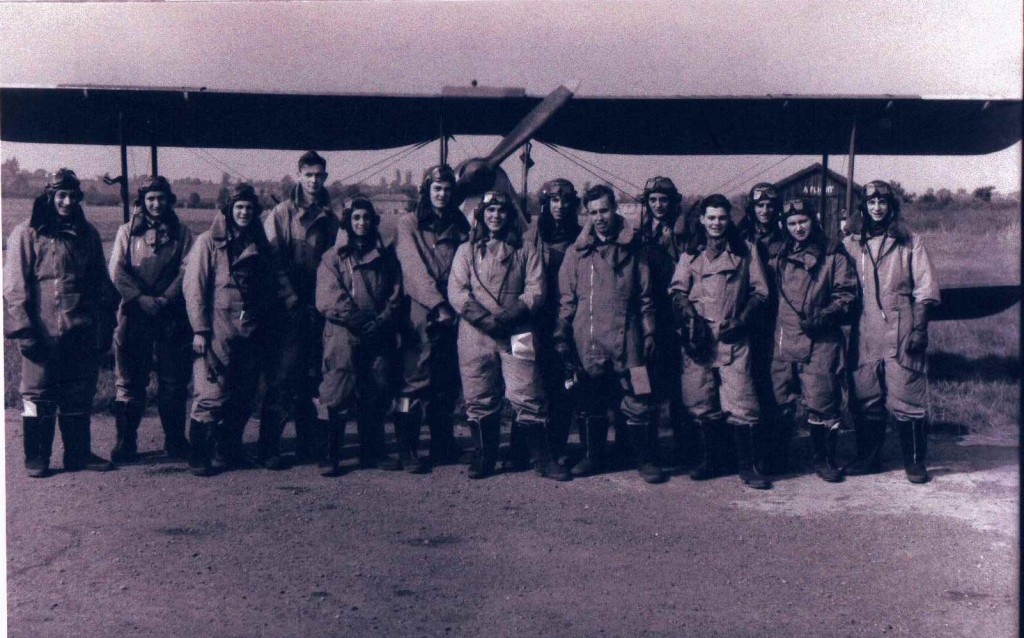 The central reason given for this, was that they wanted efforts to be concentrated on producing single seat Spitfires; due to the shortage being experienced by the RAF. As a result of this the company shelved the plans until 1944, when eventually Supermarine modified a Mark V, namely ES127. This two seat prototype was then issued to No. 261 Squadron operating in the Middle East theatre. This aircraft did not have dual controls, and so was only used as a ‘squadron hack’ – it did however provoke thought.

Whilst this idea was being considered in the UK , it fell to the Russians to become the first to actually produce the two seat Spitfire for operational purposes. They had already converted some of their own front line fighters to accomodate another seat, and with the acquisition of the Spitfire did the same. Very little is known regarding this conversion, but it was widely assumed that several Spitfires were subject to this treatment. 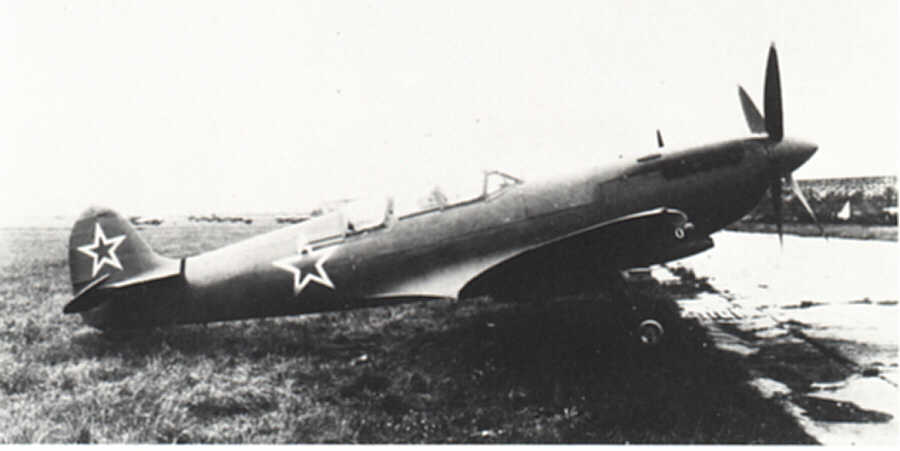 It wasn’t until Supermarine embarked on a private venture in 1946, that we saw the first true two seat Spitfire in the UK. This was a Mark VIII serialised MT818 and bearing the civil registration G-AIDN. Early in 1947 this aircraft went to Boscombe Down for handling trials, the results which were very favourable. There were, however, no orders forthcoming from the Ministry of Defence due to the fact that the RAF were turning their attention to jet powered aircraft. The conversion at this time was mainly used by Vickers Armstrong (who had incorporated the Supermarine Company within their group) for demonstration and promotion purposes. It was later to compete in air races including the 1950 ‘King’s Cup’, before being privately purchased and transported to the USA in 1985. It would later return to the UK, and into the hands of the Heritage Hangar at Biggin Hill.

During the 1950s and 1960s the Irish Air Corps received several two seat Spitfires for pilot training that had been converted by Vickers-Armstrong at Eastleigh airfield near Southampton. This enabled them to of put a trainee directly into the second seat. Having said that, certain problems were experienced in doing this. The main one being that the instructor, situated in the rear seat, experienced difficulty in seeing where he was going when taking off and landing. With the Merlin engine sitting at the highest point of the Spitfire, it was not until the tail wheel left the ground and the aircraft levelled out that he could see what was ahead. It was also found that the fitting of an additional cockpit made conditions very cramped for instructor and pupil. None-the-less the two seat Spitfire served its purpose in training many Irish pilots.

One of the first two seat Spitfires to offer the public a chance to experience this incredible ride was ML407 – nowadays known as ‘The Grace Spitfire’. This Mark 9 Spitfire was originally converted by the Vickers-Armstrong company, before being sold to the Irish Air Corps. After returning to the UK, it was rebuilt and restored by engineer Nick Grace; and for many years offered the paying public the unique opportunity to fly in it. Flown initially by the only female Spitfire pilot in the world, Carolyn Grace, this aircraft continues to grace the skies not only flying passengers but also making regular appearances at air shows throughout the country.

With the recent relaxing of the CAA ruling on flying passengers in aircraft such as the two seat Spitfire, several aviation companies now offer the public this opportunity. The acquisition of Spitfire TR9 MJ627 (G-BMSB) at the heritage hangar has allowed the public to fly in this unique Spitfire, which has a wartime history. Rolled out of Castle Bromwich in 1943, it served with No. 441 (Silver Fox) Royal Canadian Air Force Squadron.  It was responsible for shooting down a FW190 over Arnhem in September 1944 thus making it a very historical aircraft. Sold back to Vickers-Armstrong in 1950, it was converted to a two seat Spitfire and sold to the Irish Air Corps. Retired in 1960, it returned to Biggin Hill and joined the heritage hangar fleet. 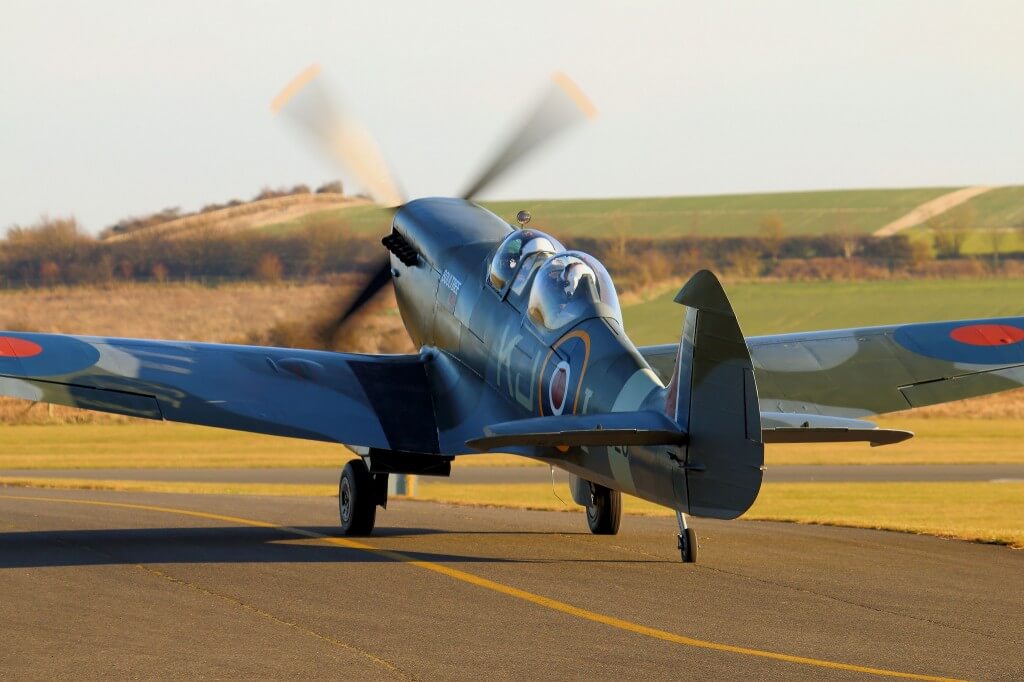 In early 2016, another unique two seat Spitfire joined the fleet when Tr.8 MT818, the first ever conversion done by Vickers-Armstrong, arrived after a lengthy period of overhaul and preservation work. Together with MJ627 the two aircraft have allowed many people to experience an emotional flight. As Dan Griffiths, one of the three pilots who have the privilege of flying the public, once eloquently put it: ‘ I consider it an honour to fly such aircraft and to allow the people to experience what I feel every time I fly’.