So there we were just adding a new promo deal for our London bread making classes to our website (down from £99 to £39 – bargain!), when we started getting all nostalgic about that famous Hovis advert. You know, the one with the young boy who trudges up the steep hill with his bicycle to deliver the bread? Here’s a reminder for you..

After watching it again and loving that countryside scene from a bygone age accompanied by that atmospheric music (World Symphony by Dvorak), it was no surprise to learn that this rather quaint commercial was voted Britain’s all time favourite in 2012. Intrigued, we decided to find out more…

After getting over the shock that the advert was first shown on TV in 1973 (that makes us feel old. Very old), we were then surprised to discover that it wasn’t filmed in a good old northern town at all (despite the voice over being about as from t’up North as humanly possible). It was actually shot on location in sleepy old Dorset – Gold Hill in Shaftesbury to be exact.

It turns out the boy on the bike with the cloth cap was, the then 13 year old, Carl Barlow. Now a retired fireman, he recently donned with cap and linen suit once more to recreate the advert. We love the way he describes how he won the role of the bread delivery boy: “It was pure fate that I got the part as the Hovis boy. I was down to the last three and it turned out that one of the other two boys couldn’t ride a bike and the other wouldn’t cut his hair into the pudding bowl style (it was the seventies after all). So as the only the boy who could ride a bike and would cut his hair, I got the part!”

As for filming the famous scene where the boy struggles up the hill and then freewheels back down, Carl remembers that it ‘took two days of filming before the director was happy’. Sounds like the director was pretty fastidious, so we decided to delve deeper. ‘Crumbs’ we said, when we discovered the man behind the Hovis advert was none other than renowned film director Sir Ridley Scott!

Funnily enough, his foray into cobbles and bike riding with loaves doesn’t generally feature on his filmography, but it’s amazing to think this was just a few years before the blockbuster ‘Alien’ hit our screens, followed shortly after by the absolutely seminal film (and our personal favourite) ‘Bladerunner’. Who’d have thought the visually striking scenes in the cityscape of the futures in ‘Bladerunner’ would have been preceded in Scott’s brilliant mind by this rather quaint and very traditional Hovis TV advertisement?

And as for the script, it’s a far cry from the bellowing monologues by Russell Crowe in ‘Gladiator’, as there’s talk that ‘T’was like taking bread to’t top of the world’ up those steep cobbles, but ‘with wheatgerm in that loaf’, the baker would say ‘get it inside you boy and you’ll be going up that hill as fast you come down’. Then again, maybe Maximus Decimus Meridus could have done with some good old fashioned Hovis doorstep sandwiches before stepping into the arena and fighting to the death as a gladiator? 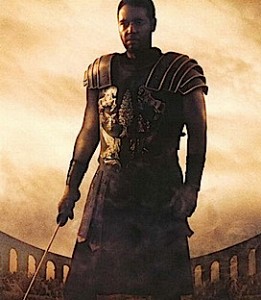 Have another sarnie, lad!