Home Sea & Water Activities What is a Seabreacher – is it a plane, a boat…or a dolphin? 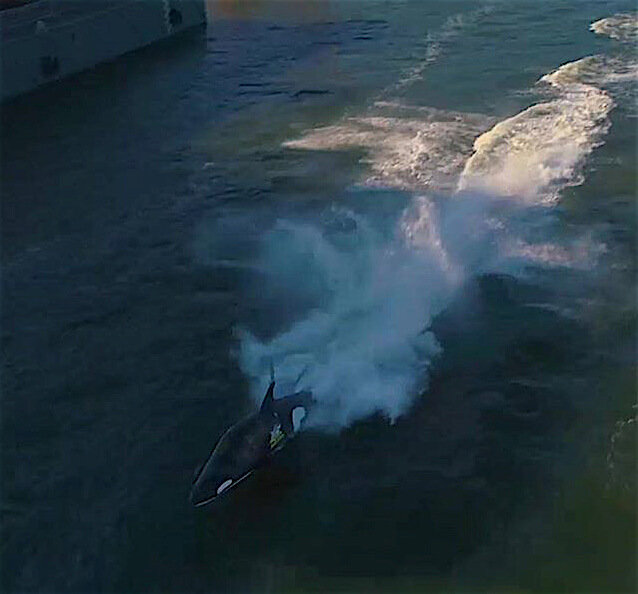 What is a Seabreacher – is it a plane, a boat…or a dolphin?

What is a Seabreacher?

If you go down to Victoria Docks in central London, you could well meet the Seabreacher. The Seabreacher is like no other watercraft you’ll ever have seen. It looks like some kind of submarine, it moves in the water like a dolphin, it’s piloted like a plane – and thanks to IntotheBlue, you can ride in one!

In essence, the Seabreacher is a semi-submersible vessel. But what makes it unlike any other boat, is the fact that it can power along he surface of the water and then dive below surface, plunging up to two metres into the water. It can then breach out of the water again, just like a whale, shark or a dolphin can, hence the name. 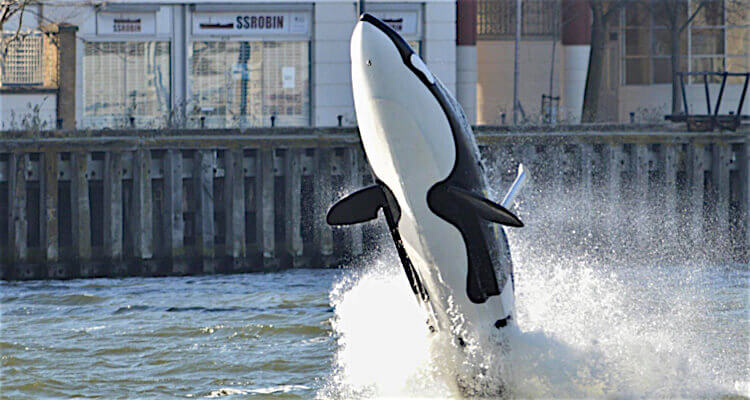 What is the Seabreacher doing? Breaching out of the water just like a whale – with you inside!

So, how does the Seabreacher work?

Seabreachers are jet-powered like a jetski and are piloted using using hand sticks and pedals. Just like a plane, the pilot controls the pitch, yaw and roll of the craft. The pedals orientate the jet nozzles and the hand sticks move the Seabreacher’s wings.

Moving the pedals (and therefore the water jet nozzles) left and right turns the Seabreacher left or right. Moving the pedals up or down moves those nozzles and the rear elevators up and down, so go nose down to dive, or go nose up when coming out of a dive.

Using the hand sticks controls the wings, holding them in as you dive under the water. Thanks to the Seabreacher’s snorkel, they can stay in the watery underworld for up to a minute at a time and travel at speeds of up to 40mph. On the surface you can skim along at around 60mph!

Can the Seabreacher do tricks?

Yes! Controlling the Seabreacher on three axes means you can indeed do tricks! What moves might you be busting in a Seabreacher? You could be barrel rolling, flipping and doing doughnuts too. The clever cylindrical shape of the Seabreacher (which does have more than a passing resemblance to sharks, whales and dolphins) means the boat is self-righting too, which is convenient! 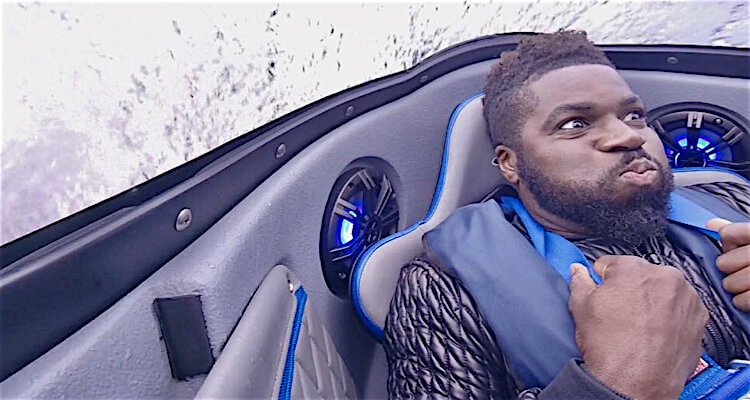 What’s a passenger ride in a Seabreacher like? Pretty gnarly actually!

What is it like for a passenger inside a Seabreacher?

The Seabreachers have fully enclosed cockpits, with a glass cover made out of F16 jet fighter-grade glass. They are two-seaters tandems, so you sit behind the pilot. It’s pretty snug in there, so you’ll need to be less than 110kg and under 198cm to be able to ride in one. It can get quite warm in there too, so loose comfortable clothing and layering is recommended.

So no wet suit then?

No! The Seabreacher is a full water tight vessel, even when you’re diving in and out of the water like a dolphin, which is what makes it so amazing and unique. 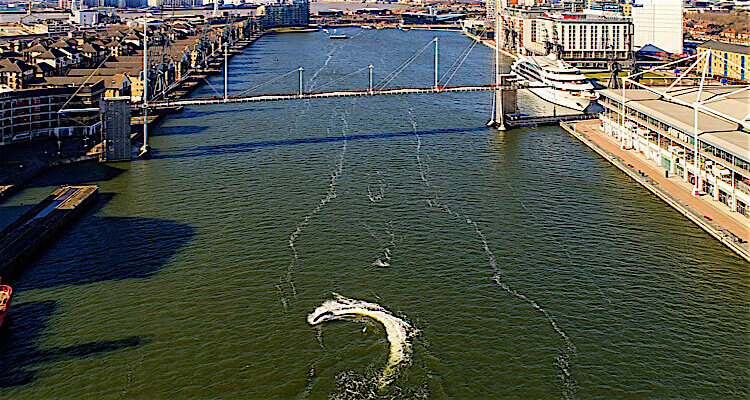 Spot the whale-like Seabreacher in the London waters!

Will I get sea-sick riding in a Seabreacher?

On a full-on extreme acrobatic Seabreacher experience you’ll be experiencing g-forces in a similar way to a stunt plane. Pilots will gear rides to each passenger and the level of manoeuvres will be adjusted accordingly. But it’s worth noting, it’s best not to eat a large meal within two hours of your experience!

It’s tricky to explain just how it feels as a passenger inside the cockpit of a Seabreacher as you skim along the surface as speed, to then dive in and under, creating a wake as you go, to then breach out of the water, roll in the air and splash back down.

So, have a watch of this video to give you an idea of what a Seabreacher is like.

There’s only one place in the whole of the country that offers Seabreacher rides and it’s a Victoria Docks in London. The company that operates the rides is also the UK distributor for these crazy Seabreachers. A 20-minute weekday Seabreacher blast costs just £99, with longer ride options available on weekdays and weekends too.

What are the best sponsored activities for charity?
The Best Karting Tracks in the UK