Home General Experiences Glow With The Flow – How Do Neon Lights Work? 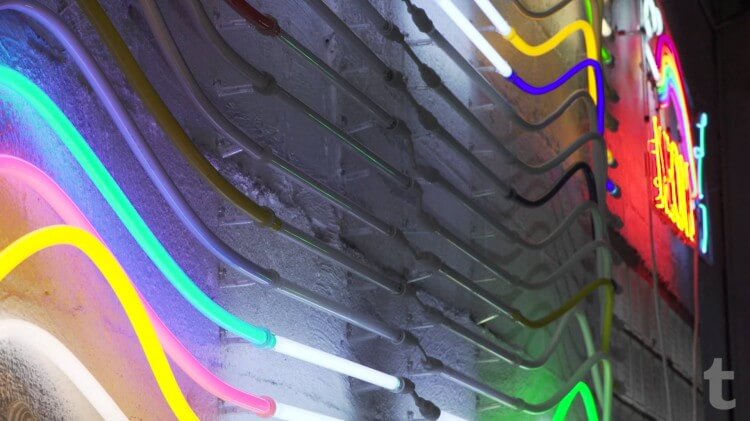 Glow With The Flow – How Do Neon Lights Work?

Glowing banners in the dark streets while walking around. The welcoming lights of your favorite fish and chips shop after a hard working day. Neon lights have, almost subliminaly, formed part of our lives for a long time. From our favorite movies, to restaurants or social media, neon lights are a very eye-catching idea to attract people. But how are neon lights made exactly? 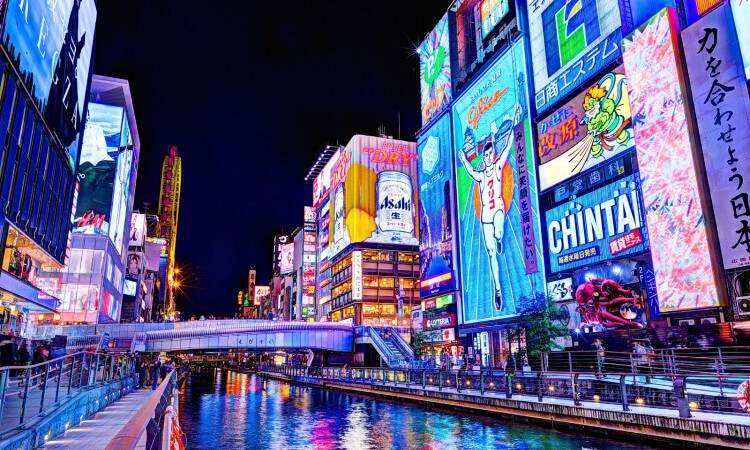 Dotonbori Street in Osaka (Japan) is a neon sign paradise!

What are neon lights made of?

Neon lights consist of glass tubes filled with inert gases, meaning they do not react when combined with other chemicals. The common held belief is that neon gas is used, but both argon and krypton – which, by the way, is nothing to do with Superman – are regularly used too. Once the chosen gas has filled the tube, a couple of electrodes are then attached to the end and as the volts of energy travel through, the atoms inside the gas start to glow. These neon tubes can be curved and bent into artistic shapes or letters, that are normally used to add a colorful glowing effect in advertisement displays. 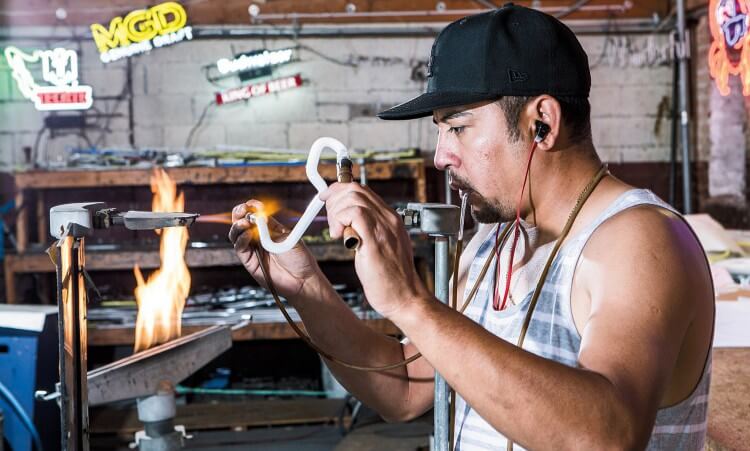 Grab your pen and paper, ladies and gentlemen! We are jumping straight into the tinkering world of neon bending. The process of creating neon lights is a lengthy one, and it has a number of steps to take in order to create beautiful pieces, so here we go!

The first step is always choosing the design that you want to create, then printing it on a fire resistant white paper. To be able to figure out where exactly you should be bending your glass tube, neon artists put little black marks on the white sheet, as a kind of stensil.

Remember when your mum used to say “don’t play with fire”?, well, forget about that! The next step is all about playing with fire. To shape the tubes, which by now have been marked in the spots you need to bend, you’ll be holding the glass over a 800-900C flame coming from a tool called a ribbon burner, and gently turning it around with your fingertips. When the glass gets soft enough – this normally takes around 30 seconds – it’s time to bend it in your desired shape.

Once you’re done with all the bending and melting, it’s time to fuse the electrodes at the end of each tube and hit it with a 20,000 volts electron bombarder. Pretty cool, uh? All that’s left to do now is inject the specific gas used for the piece, glue it to a wooden or plastic piece and turn on the light. Et voilà! 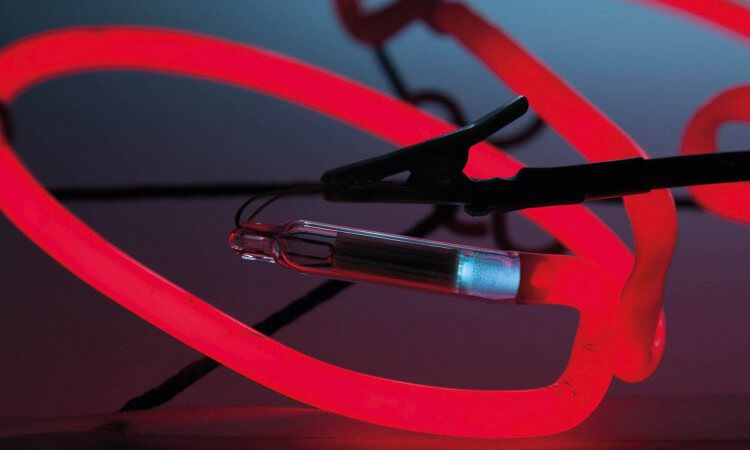 So what sort of alchemy allows the tubes to glow with different colours? As you might have guessed by now, it has something to do with the gases are used. When combined with electricity, all these different gases release a particular colour, depending which gas you introduce in the tube. Neon gas gives a natural red glow, Argon emits a light blue color and Krypton a bright white one. You can also create a wider range of colors by using colored fluorescent lights inside the tube or using already-colored glass.

Is neon bending easy to learn?

Truly the one million pound question, and the simple answer is “it depends”. If you’re learning neon glass bending as a way to create art pieces, especially abstract ones, it tends to be easier and it normally only takes around 2-3 months. For more intricate designs such as letters or specific patterns, it can take from 6-8 months all the way up to 2 years to be able to fully master the technique. Even that estimate is taking into account practicing for a few hours every week. But hey, Rome wasn’t built in a day! 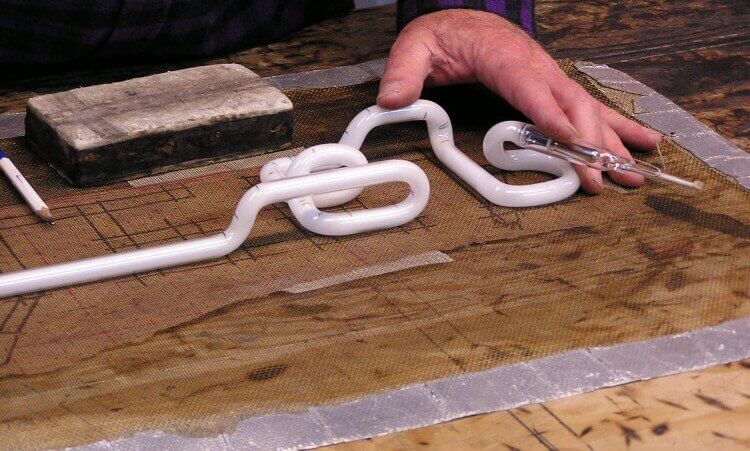 Workshops provide all the tools and knowledge to learn neon bending.

Where can you practice neon bending?

Now that we have piqued your curiosity, you might be wondering where exactly can you practice neon bending? If it’s your first time stepping in the world of neon art, we recommend taking a beginner’s taste experience in a professional workshop, where you’ll be able to learn all the basics steps from bending to illumination. As a plus, you can create your own neon light and take it back home with you!

Feeling confident in your handcraft skills and think you found your “true calling”? Then why not joining a longer course at a workshop? Neon Workshops in Wakefield is the most well-known and recognized school in the whole England. Having said that, the ultimate goal would be to create your own neon bending studio where you can practice as much as you want without completely ruining your wallet! 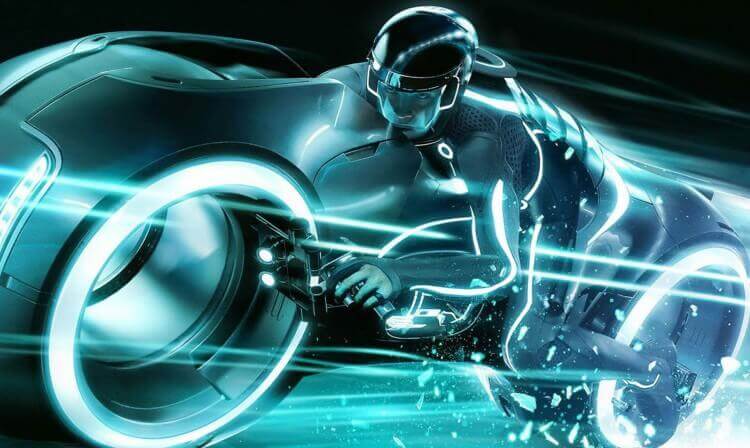 The TRON movie has some beautiful neon lights imagery!

Truth be told, with the invention of LED (Light Emitting Diodes) lighting, the whole neon signs and lights industry has started to fade slightly. But, what’s the difference between neon lights and LED exactly? Which one is considered better?

LED lighting is made with thin polymer tubes, which makes it very flexible and easy to replace, as well as occupying less space. On top of that, LED only transforms energy into electricity which, in general, consumes between 5-10% less power than neon signs. On the other hand, neon lights give a warmer light than LEDs do and it feels more inviting and aesthetically pleasing. Not to forget all the movies that chose neon lighting as part of their visual charm including: Moulin Rouge, Drive, Blade Runner and Tron among others. 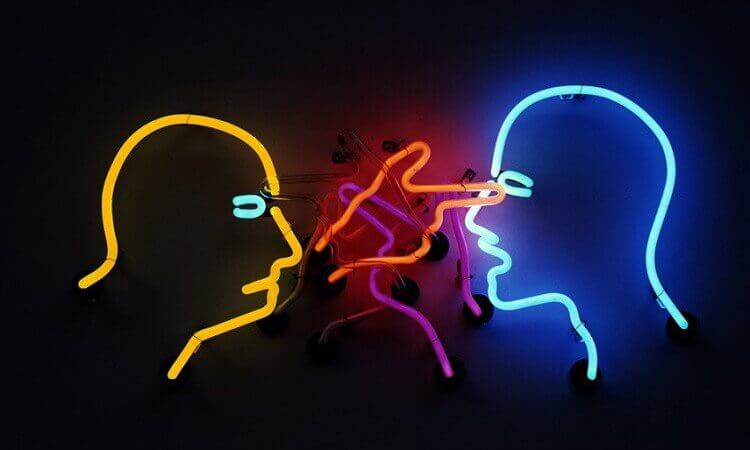 One of Bruce Nauman’s most famous neon works.

Are there any famous neon light artists?

Since its discovery in the 19th century by British scientists William Ramsay and Morris W. Travers, neon lighting has been spreading all over the world, and with it, the rise of neon lighting artists. From movies, to TV shows or contemporary art, neon art is used in every creative way possible! There are dozens of artists that deserve the spotlight, but we can’t help but have our favorites! Julia Bickerstaff, a renowned neon shaper, has made signs for the Star Trek films, a famous hotel in Dubai and has worked on some of the famous Picadilly Circus signs, before they changed to LED.

Bruce Nauman, born in 1941, is a veteran among neon artists. With dozens of collections under his arm, Nauman has exhibited his art in some of the most renowned museums around the world, such as the Tate Modern of the Guggenheim, as well as being awarded with the Golden Lion of Venice Biennale twice in his life. He was even considered one of the 100 most influential people in 2004 by the TIME magazine!

So there you have it! As you can see neon signs have more to them than meets the eye, and they are, no doubt, one of the most peculiar sights in our cities. So what are you waiting for? Time to put those hands to work!

Mother Nature’s finest – the best free days out for kids
Pure Hoppiness: Home-Brewing Your Own Beers!