The Magic of Spitfire Restoration – Keeping the Icon Alive 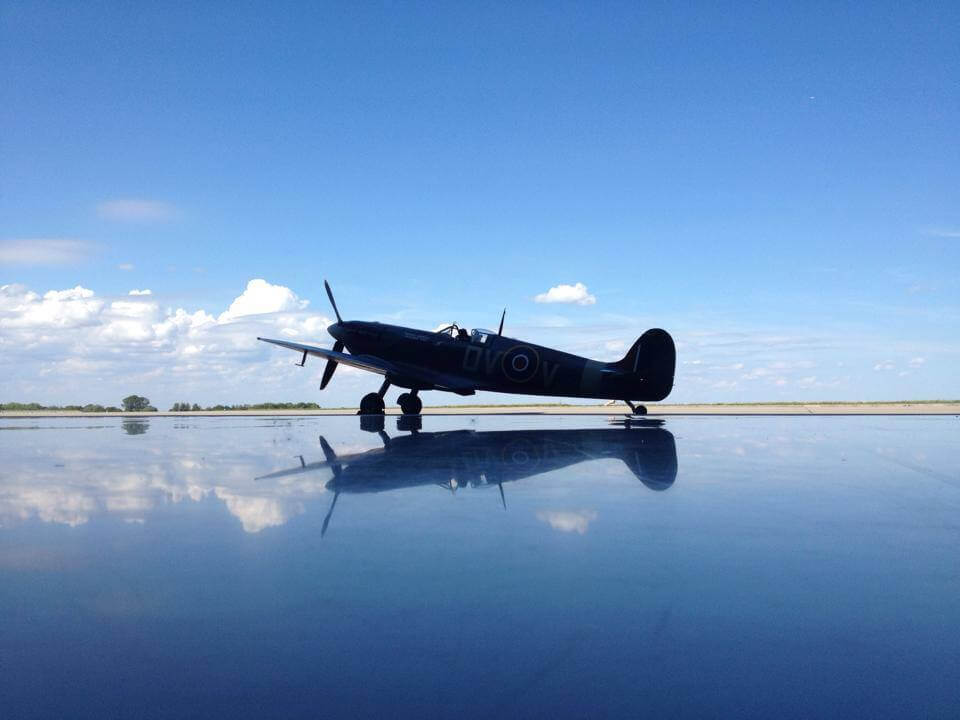 The Spitfire waiting to take off

The magic of Spitfire restoration has enabled us to enjoy flights in the Spitfire over 80 years on from it’s original production. To explore the story of how the Spitfire has been brought back to life, we’re working with Aviation Historian Robin J. Brooks – author of Kent and the Battle of Britain – to find out where it all began.

In March 1936 Captain J ‘Mutt’ Summers flew the prototype Spitfire K5054 from Eastleigh Airport, for its first trial flight. It went well and upon landing back on, the Supermarine engineers gathered around as he switched off its Rolls-Royce Merlin engine. His first words were ‘You do not change anything. It is the perfect aeroplane’. And, of course, it was. All in all a total of 20,351 Spitfires built for the RAF, with marks ranging from 1 to Mark F.24.

The story of the Spitfire began on October 1, 1931 when the first specification (F.7/30) was issued calling for a single seat fighter with the main requirements being:

The specification was up-graded on July 26, 1934 by proposing to modify the existing blueprint. Namely by building a new pair of wings, incorporating a retracting chassis and reducing the area of the wings. There were other minor changes to the original spec with the design going through two further up-grades; with the last being F.10/35. This was the  penultimate specification pending the first flight of the prototype Spitfire which had its own specification. 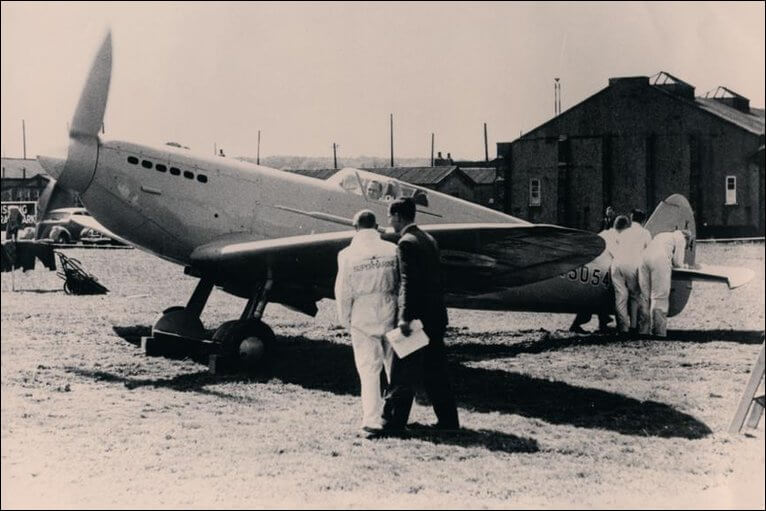 Summers in the cockpit of the K5054 Spitfire prototype. (Credit: BBC).

The quote from Mutt Summers that ‘it is the perfect aeroplane’ was borne out by the fact that on June 3, 1936 Supermarine received an initial order from the RAF for 310 Spitfires – required under Expansion Scheme F.  Sadly between the end of the Second World War and the 1960s, when the type was retired in favour of jet powered aircraft, the majority of them went to the torch and scrap men. However, there were a few Spitfire restoration enthusiasts and engineers who would ensure that the type carried on flying. As a result of this, today Spitfires are being rebuilt in ever increasing numbers.

Included in the early restorers was former Red Arrows leader Ray Hanna. A New Zealander by birth, he established the ‘The Old Flying Machine Company’ in 1981. Ray was known for his expertise in flying Spitfires and other warbirds and together with son Mark, soon moved into aircraft restoration. 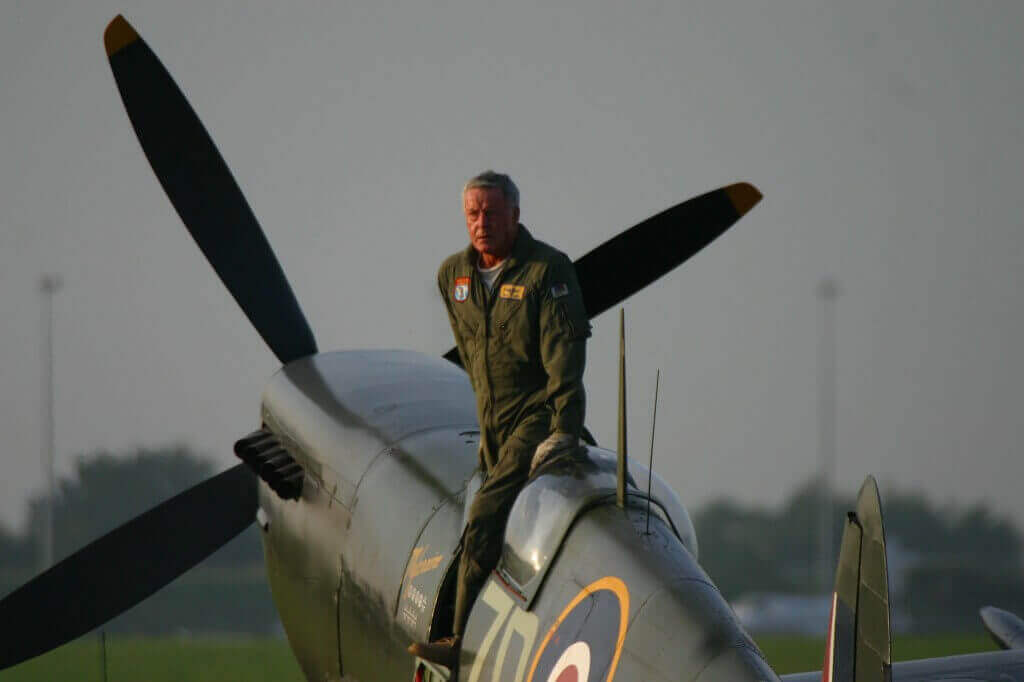 Also involved during this period in aircraft restoration, and with specific regard to Spitfires, was ‘The Aircraft Restoration Company’ known purely as ‘Arco’. Managed by Spitfire pilot John Romain, the company also incorporates ‘Historic Flying Ltd’. Since the 1990s, however, the restoration of Spitfires has gathered pace. Names such as The Wings Museum and The Shuttleworth Collection were all vying for this very precise – and very demanding – type of aero engineering.

Across the world there are many other Spitfire restoration companies, some as far away as Australia and New Zealand, but nearer to home there is a vibrant company whose aim is to restore two Spitfires a year to flying condition. It is known as ‘The Spitfire Company Ltd’.

Based on the former Battle of Britain Sector airfield in Biggin Hill, Spitfire restoration at this world famous aviation hub began when the remains of a Mark 9, TA805 were discovered. It was then bought back to the UK from South Africa, after service with the RAF and the South African Air Force. Now known as ‘The Kent Spitfire’ it was from this humble beginning that a heritage hangar was created, in order for further Spitfire restorations to take place. In conjunction with an established specialist organisation called Airframe Assemblies based on Sandown Airport on the Isle of Wight, the average restoration of a Spitfire to flying condition can take as long as one to two years. 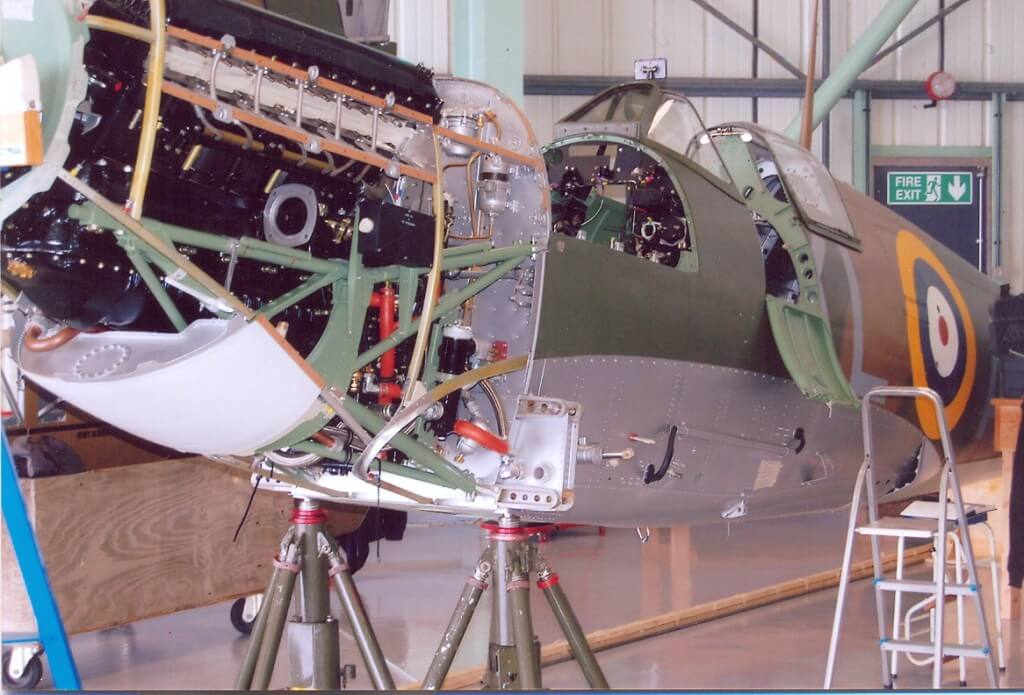 Front end of the Spitfire being rebuilt

From Airframe come the re-manufactured fuselages, wings and tail planes which are transported to Biggin Hill; after receiving the camouflage treatment from Vintage Fabrics based at Audley End. The team seven highly skilled engineers then fit the hydraulics, the pipe work and electrics into the fuselage; before the major parts such as the wings and tail assembly are fitted and secured. Every item is fitted with the greatest attention to detail, using original drawings, photographs and specifications. This all goes towards making the aircraft operate and look as if it was straight off the original production line. 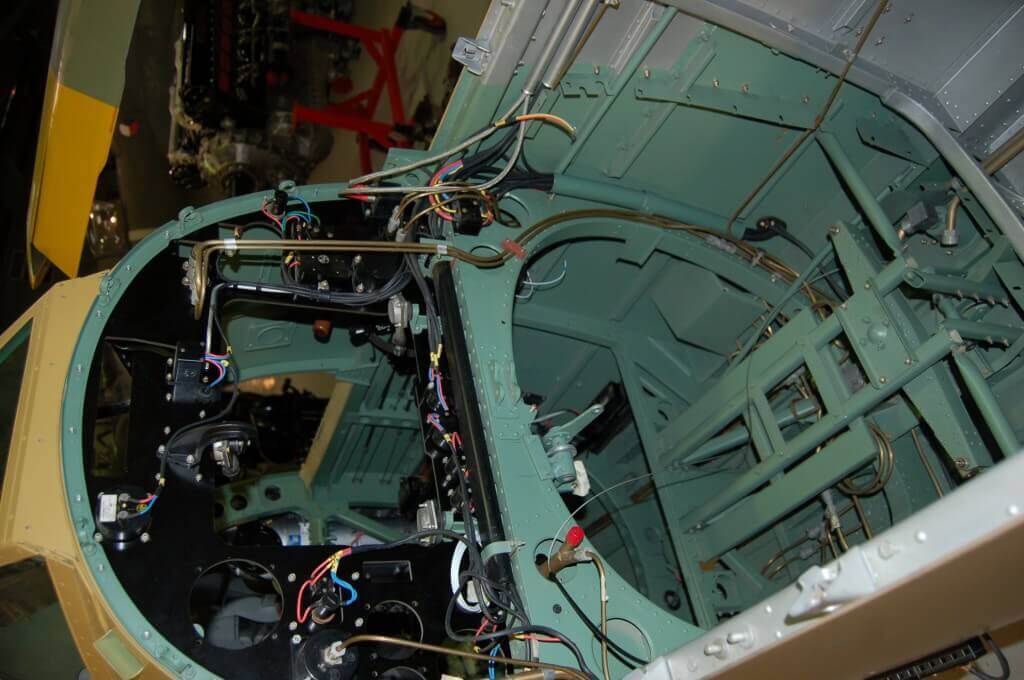 The ability to carry on the serial number of the original ‘deceased’ Spitfire, is enabled by ensuring that part of the old aircraft is incorporated in the rebuild. These parts can be as small as a serial number plate, or as large as an oleo leg for the undercarriage. This helps in tracing the history of the aircraft; and enables a potential purchaser to have a complete dossier from birth to restoration.

The Spitfire is powered by the Rolls-Royce Merlin engine with various marks giving a power ratio of between 1,030hp for a Merlin II and up to 2,050hp on the Griffon Merlin. Every engine is stripped down by a company in Sussex and, if necessary, fitted with new components. After this, they come back to the heritage hangar in a condition known as ‘zero timed’; and are fitted by the hangar engineers into the engine bearers. 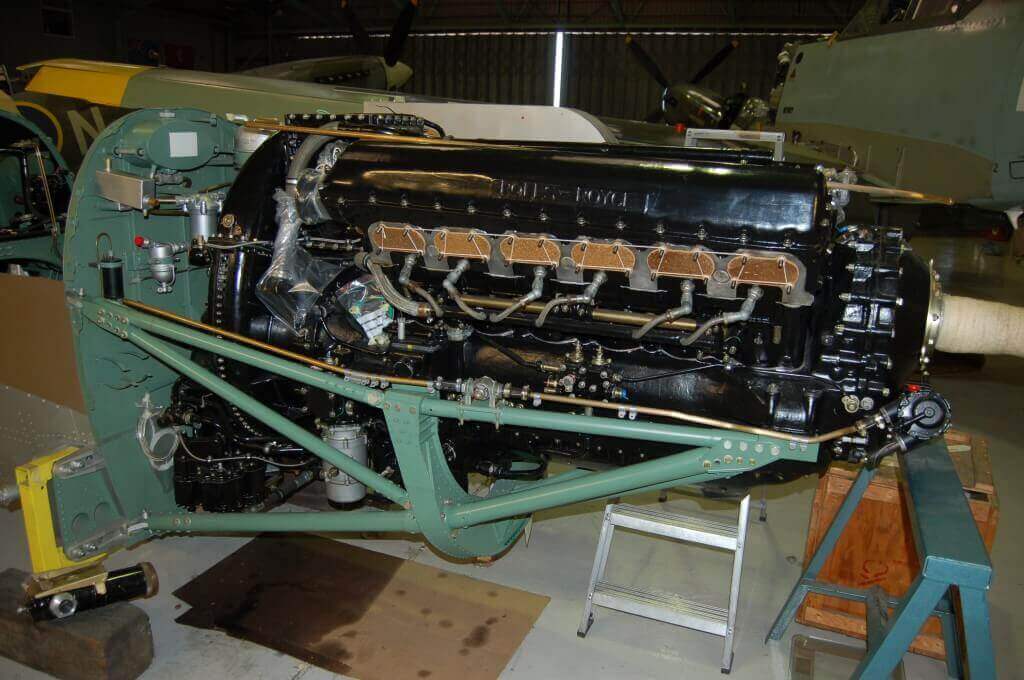 Merlin engine being fitted into a restored Spitfire

When all is complete and the restored aircraft is rolled out, the Merlin fired up for the first time in many years. It is at this point that the spitfire restoration becomes alive. To ensure that the restorations are as close as possible to the last wartime specification issued, reference is made to original Supermarine drawings. It is only by adhering to these strict rules, that the engineers are able to produce the quality of workmanship that has enabled The Spitfire Company Ltd to become the foremost Spitfire restoration company in the UK.

Today, there are currently around thirty restored Spitfires flying in the United Kingdom. To the public, the sight and sound of a Spitfire in the sky is as significant today as it was during the dark days of the Battle of Britain. It represents a spirit of defiance when the country was threatened with invasion; and it ensures that the sacrifice of all those who flew such aircraft and died will never be forgotten.

The last WW2 Spitfire pilot living in the Czech Republic flies again at Biggin Hill
Where Can You Fly in a Spitfire? – IntoTheBlue Essential Guide