Home General Experiences Get ready, get set for round of the Great British Bake Off 2015!

Get ready, get set for round of the Great British Bake Off 2015!

We were so beside ourselves with excitement about the return of the Great British Bake Off on BBC 1 last week that we couldn’t bring ourselves to write about it, but now we’ve been introduced to the dozen contestants for the 2015 shows and we’ve let the biscuit crumbs settle, here’s our take on what we’ve all been talking about… 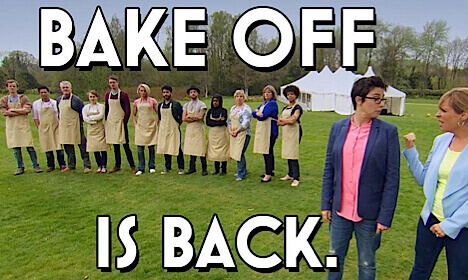 All hail the 12 contestants of the 2015 Great British Bake Off!

First up has to be the biggest scandal in GBBO history, which immediately rocked the Twittersphere whilst the first episode was airing; ‘WHO DECIDED TO DITCH THE KITCHENAID FOR THE KENWOOD?’ screamed baking fans across the land.

Yep, the astute amongst us noticed straight away that the bourgeois ‘must-have’ that is the retro KitchenAid had been replaced by the all together inferior Kenwood Mixer. Highly appropriate that Black Forest Gateau was on the menu, as this mixer is straight off of the 70s – (remember the ‘K beater’ anyone?!). But then articles sprung up in news sources (and the Daily Mail) comparing the Kenwood to the KitchenAid and finding that it was more than a match for those lusted after pastel coloured gadgets. We’re sure we’ll all be converted by the end of the series and there will be a big jump in sales. 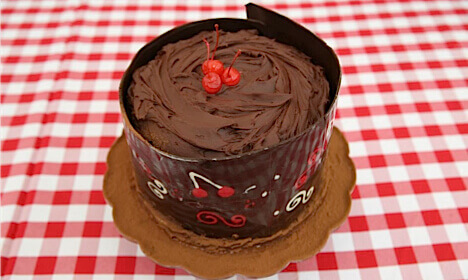 Talking of sales, the big supermarkets have cashed in on cooking, announcing that Thursday (the day after the show) saw big rises in customers buying key ingredients that had featured on the show the night before. We’re talking a 32% in the glace cherry sales according to Morrisons and a 42% rise in chopped walnut pieces following Mary Berry’s walnut cake technical challenge. 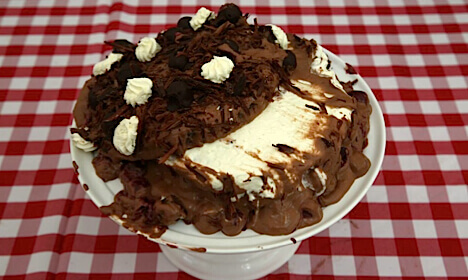 But the biggest amount of post launch show scaremongering was saved for the contestants themselves. Marie, the very first star baker of the series, is a ‘super pro’ screamed the Daily Mail, as it claimed she ‘trained at Escoffier in Paris’, when in fact she’d done a week’s cookery course and gone home with a certificate. Then there’s Alvin, the current favourite to win, who has been branded ‘semi-pro’ as he has over a 1000 followers on his Instagram account that’s filled with pictures of, yes, you guessed it – cakes and bakes! D’oh.

Our favourite reproach was the one claiming Scottish lass Flora was ‘too posh’ as when her timings and temperatures on the standard GBBO ovens were all out, during the Madeira cake bake it was because she ‘only cooked on an Aga’. That’ll be the Aga in her parents’ traditional Perthshire farmhouse then…

Even before this series began, the Great British Bake Off was attracting controversy with the Sound of Music advert that ran on BBC channels being banned for breaching copyright as Mary Berry and Paul Hollywood danced on the hillside miming to that famous song by Rodgers and Hammerstein. 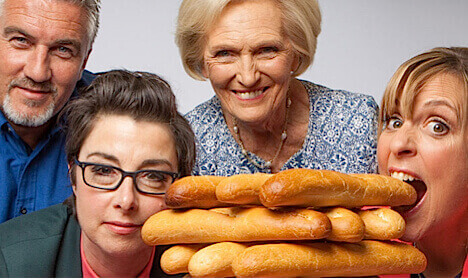 Mel and Sue, the Bezza and Hollywood are back

As for who’ll win, we haven’t got the faintest idea and we like it that way. We know the whole series is filmed in advance and is ‘in the can’, so to show insiders and, of course, the contestants themselves, the winner is already known, but it’s kept a secret. Or is it? One bookies apparently suspended betting last week (after the profiles of the contestants had been announced, but before the first episode aired) because ‘there had been a run on maximum value bets in the Ipswich area’, which is curious as none of the amateur bakers are from or have direct links to the town…

Now we’ve written about it, we are properly excited again for tonight’s episode – and this week it’s biscuit week, with the second technical challenge of the series being the decidedly tricky Arlette biscuit. That Paul Hollywood is a cad giving them such a hard task in week two. Meanwhile, we’ll be tuning in to watch how the great Mary ‘Bezza’ Berry continues to age backwards!

If you’re feeling inspired by all this talk of baking and you too want to cook like a ‘semi-pro’ on the Great British Bake Off, IntotheBlue.co.uk has a very tasty range of cookery lessons for you to try.

Driving a Tank – How it Works
Travel bag troubles, packing panic and how you can deal with it!