There’s nothing like a Bank Holiday weekend is there? Now we’re back at work after our long weekend, we can take a look at back on the past few days. Some of us go away for the weekend, whilst others stay at home and crack on with some DIY. Maybe you caught up with friends and family, or maybe you indulged in all the fabulous sporting and entertaining events like we did? 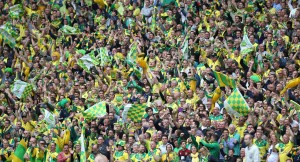 See you in the Premiership Norwich!

There was SO much going on this May Bank hols. There were the closing parties at the Cannes Film Festival, the glitz, glamour and deception (yes, we’re talking about Hamilton’s ill-advised pit stop!) of the Monaco Grand Prix and you couldn’t ignore the sheer elation of pint-sized manager Alex Neil and Delia ‘let’s be ‘aving you’ Smith as her beloved Norwich secured the last place going in the Premier League for next season? 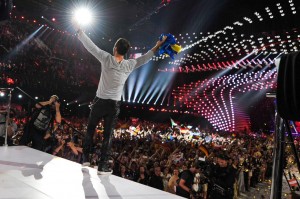 But who could forget the cheese-fest that was Eurovision, beamed live from Vienna to zillions of viewers across the globe, to see who was going to nick Conchita’s Wurst crown?

Was it just us, or was it just a tad dull this year (apart from Spain’s dress and the host nation’s burning piano)? It seemed full of power ballads on stage, but over on the old socialmedias it was hilarious. Proving that, despite coming a miserable 24th out of 27th in the singing competition, the United Kingdom would definitely come top in Twitter humour and we loved the comments that were flowing all night long on #Eurovision.

Many of us commented on the instant forgettableness of Latvia: ‘I can’t even remember this one while I’m listening to it’ and the utter madness of Estonia’s song about leaving the house and smiling at animals. Even Sweden who gave us the winning song, did not escape the British sense of humour with the Twittersphere loving the rather enthusiastic drummer in Mans Zelmerlow’s band. At this point, we must also point out that we managed to take the mickey out of ourselves too, with some sharp wits saying that they fancied eating some Bird’s Eye Potato Waffles after Electro Velvet’s rather similar sounding tune…

As for the results section of the show, who’d have thought Nigella Lawson would be dishing up the points for the UK? We weren’t expecting that! We loved the cloth cap, straight out of a long shift for a fast food chain look of Andri, the man charged with delivering the votes from Albania, whilst that Russian presenter with his joke and scary laugh just left us bamboozled by the brilliance/sheer naffness of it all!

And take a look at this Tweetometer chart above. It seems despite keeping our paws on the British Pound and clambering for a referendum, we aren’t actually Eurosceptics at all, with the UK being heads, shoulders, torso, arms and legs above the other countries when it comes to the number of tweets about Eurovision being sent.

As we say ‘Tschuss’ to Vienna’s 2015 Eurovision and ‘Hei’ to Sweden 2016, we should be thinking about shoe-horning in an IntotheBlue.co.uk-related link as we get near to rounding off this blog article. Maybe we could put in a link to our drive a fire engine experience so you could learn to put out any musical instrument fires if you ever go to Austria? Perhaps we should suggest one of our many tasty cookery courses in honour of Nigella and Delia? Or how about we just told you that you too can record your very own version of Sweden’s winning ‘Heroes’ song with our superstar singer recording studio sessions? See you in the land of Ikea and pickled herrings neat year…

Brits most likely to try new things when on holiday
Bring on the 2015 festival season!